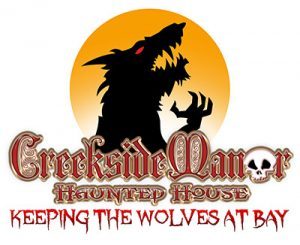 It has been a year now since the Wedding of the Century, at least what would be considered the wedding of the century at Creekside Manor. It was a hair raising ceremony as Precious Mockenburry wed “Felton” a mysterious man, who very little is known about still to this day.

Since that blessed but curious event something has changed at Creekside Manor, and not for the better. Thankfully Mable and her sister Victoria have managed to cheat death once again and have returned to undertake the daunting task of reclaiming some kind of control over the Inn, the spirits that remain, and the souls that visit. The people in the house are now struggling with something or someone and it’s easy to sense that there are two very distinct and intense forces at work here. Neither is willing to relinquish their power to the other, leaving the house eerily divided.

Once you enter these doors there appears to be no way out. Frederick the Inn keep will see to that. You will be quickly ushered into a rickety old elevator that transports you to another floor, to the place where Mable and her sister Victoria remain ever vigilant. What other miserable spirits will you find trapped here in this purgatory…?

Butcher is busy doing what he does best. Could it be not just the twins he’s feeding, but some darker and more dangerous force lurking inside that needs to be pacified…?

Mable and Victoria’s spirirts are often seen in the bar talking to Sir Stephen. Could he have a clue to the mysterious presence that is trying to take over this house…?

Precious is in her bedroom sobbing in misery over the dreadful mistake she has made. Does she remain there on her own accord or is someone keeping her there against her will…?

As you pass through the library be assured that all eyes in the house are upon you, watching nervously to see if you bring additional threats to the house that’s so close to reaching its breaking point.

Mad Myrle and his fellow grave diggers are protecting the boundries of the graveyard. Their heightened sense of alert and dread are palpable. Will they let you leave the graveyard untouched or will Mad Myrle make you enter the cellar doors to Creekside…?

Perhaps you’ll find refuge with Guts, if he has a clue as to what Mabel is hiding in the dark dank spaces ahead of you. Hmmmmm, are the Twins still here…?

Who is burried in these walls? Who remains? Just who or what is encaged in this awful place? Most importantly, will you be allowed to escape in one piece?