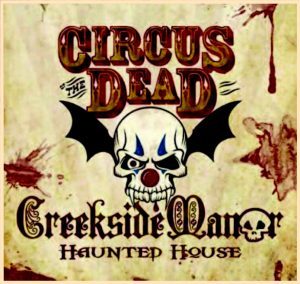 It has been a credulous two years since Mabel’s zombie has driven the wolves deep into the woods behind Creekside Manor. With the demise of the marauding pack of wolves, Mabel has once again taken refuge in the Manor. Finally, the residence that has been her sanctuary for over a century, may be called “home”. In fact, she even placed the sign “Home Sweet Home” above the entrance to her abode. This sign, which had always hung over her front door, had always symbolized how she felt about the “Creekside Manor” residence, but the wolves had knocked it down and almost destroyed it by gnawing on it. Mabel briefly contemplated putting up a new sign, however, she decided that using the old sign would readily display to all visitors her ability to persevere and overcome. Even though the sign was chewed up and bloody, it was a sign of defiance against the wolves, as well as speaking to all how she felt about the manor.

However, her solitude and the prevalent calm that she was feeling was to be short lived. For you see, tis the Halloween season and she must get the Manor ready for the festive visitors that come this time of year. There was so much to do: she must find tenants in order to replace the revenue that was lost while the wolves were in charge, there was the elevator to fix (the cable was always breaking, sending it crashing to the floors below), she was short on the finances to provide the meat for her famous “pork BBQ” accompanied by all the “fixins”, nor did she have the resources to repair the damage that had been done by the occupying wolves.

Alas, “do not despair” said a voice deep coming deep within her black vacated soul. “All will be well if you follow my advice, for you see, Dr. Cabasa knows how to rectify your problem. All you need is a large influx of tenants for a brief amount of time and that will solve all of your problems. The group I am referring to is a rather fluid band of circus performers that I used to perform with over one hundred years ago. They are a rather rambunctious group, but they will serve you well in the short term. They will rent your property and provide food for you to feed the other guests. Never, ever ask where the meat is coming from that they will supply to your butcher though. Some things are better left unstated.”

In the morning, Mabel’s gait was a little more jovial. She flittered about the house knowing that Dr. Cabasa’s intrusion, during the night, had provided all of the answers to her problems. What a relief, she could use the money from the circus freaks to get her manor back to the standards for which she had become accustomed. Not to mention, her restaurant would be back up and running in no time because the meat issue had been solved. Then a thought came into her mind, “what if I could use the circus performers as an attraction to get the general public to the manor?” I could repurpose a few of the guests and save even more money my meat costs, Mabel thought to herself. Mabel was wringing her hands in excitement as she scurried away towards the telephone in order to contact the ringmaster from the circus.