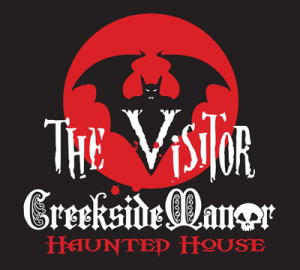 Creekside Manor has been in operation for over 200 years. Although the current building is not the original, it is thought to have been built on or near the original site – which was foolishly placed on an ancient Indian Burial ground. Suppose that explains why the house and land have always been considered to be haunted. Disturbingly haunted.

There have long been wild rumors of missing guests who dared to stay in the house. Not to mention the NINE vanished husbands of the mistress herself over the years. Yet…it’s current occupants, the Mockenburry family, continue to deny any and all rumors about the Manor House.

According to the local police department, the sheriff and his deputy have investigated the house many times with no proof of any wrong doings. Sheriff Palmer says, “The problem is that there has never been a single indication that a murder or any foul play has taken place in Creekside Manor. No blood, no bodies, no body parts.” Deputy King added, “That’s right. No clothing and no DNA evidence that the missing persons ever stepped foot in the house.” On the other hand Dr. Cabasa, the nationally known Vampire Killer and Ghost Hunter, says there is no doubt in his mind that Creekside Manor is haunted. He’ll tell anyone that will listen, “The law enforcement in this town is pitiful at best.”

Although he has never seen a ghost on the property himself, Dr. Cabasa insists “There must be an investigation into the hauntings of the house and the untold number of crimes. Unfortunately, Mrs. Mockenburry won’t let you near the place….and no one has the courage to confront that woman.”

“That woman” is none other than Mabel and she has no time for his nonsense. Hauntings…ghosts…ha! “If they only knew what was really going on in here!” she thought to herself.

You see, Mabel recently became a grandmother. Her beloved Precious gave birth to a baby boy – Mabel’s very first grandchild. What should be a happy time in her life is just one long, never-ending worry that has her pacing back and forth like a caged lion. “A baby…a baby what?!” is all she can think of.

If only Precious hadn’t married a wolf. A wolf baby with wolf powers and possibly some of Mabel’s powers – yikes! What will that make him? How can she possibly control him? Sure, Hattie the Nanny controlled Horrificus…but then there was that awful fire in the nursery.

Mabel will have to hire someone more professional…maybe even a Governess. No, what she needs is a prison guard for THAT awful little monster! He’s mean. He bites. He’s little, but fast. He can hide anywhere. One minute he’s in front of you, then he’s behind you biting at your ankles and next thing you know – biting your neck or face!

Mabel has only seen her grandson once and that was enough. She wants no part of him and will not venture anywhere near the basement. But who will take charge of baby Roscoe? Hmmmm, whomever she chooses will have to have total dominion over both man and wolf (assuming that’s what Roscoe really is).

Mabel has decided to enlist the help of the living, the dead and the supernatural. She calls them the ‘Visitors’ and they will begin arriving today. Each will be put to the test to see who can best control the monster in the basement…or rather, IF they can control him at all.

Tonight YOU will be one of the VISITOR’s applying for the position at hand.

But beware as you tour the Manor House and grounds, as you will likely encounter some of its curiously strange inhabitants. There’s Victoria, Mabel’s younger and much prettier sister, who will greet you at the door and direct you to the 13th floor. Then there’s Sir Stephen, who will be tending the bar. He knows everything that goes on within these walls – so be sure to heed his warnings! Who knows, you might even bump into Hattie if she decides come back from the dead to apply for the nanny position. Or, you might just meet the lady herself. Oh, and don’t be alarmed at the Zombies in the graveyard – they are only there to keep the wolves at bay.

Finally, it’s not advised to enter the basement – unless you are absolutely certain that you want to try your hand at controlling the baby monster child. Actually, unless you are serious about doing this – you shouldn’t have stepped foot on these grounds to begin with. These disturbingly haunted grounds. Now that you’re here though, there’s only one thing to do – wish you luck. Lots of luck.